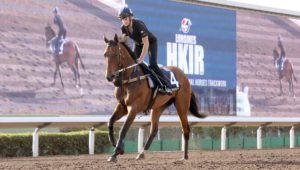 superstar – a three-time Group One winner and Hong Kong’s reigning Horse of the Year – is clearly the main attraction for this year’s HK$93 million event.

The biggest surprise is seeing an Australian-trained horse making the trip given the quarantine restrictions currently in place.

But having to spend six months in a third country before returning to Australia clearly is not an issue for Chris Waller’s Comin’ Through, who won the Group One Doomben Cup in May and finished second in the Doncaster Mile before that.

The five-year-old gelding is owned by New Zealander Sir Owen Glenn, so he will have plenty of other options outside Australia if he wants to race on in the first half of next year.